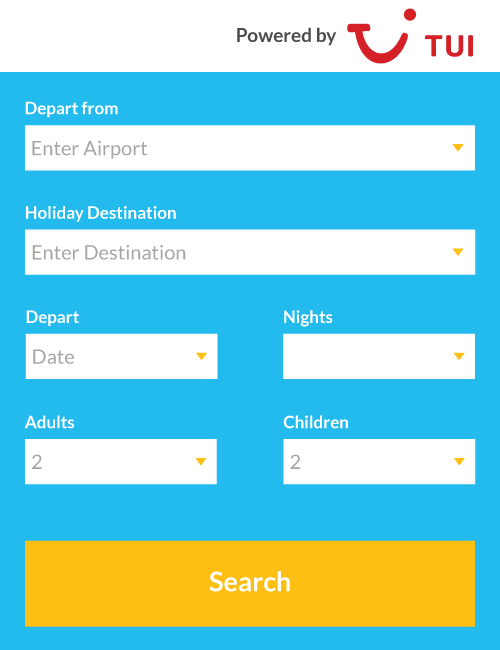 With TUI late deals in 2020, there are some fantastic bargains to be had. After all, we all love a good holiday, and a good deal, and sometimes it can be the last minute holidays that work out best. Late deal holidays can depart from as soon as tomorrow, to as late as the next four weeks away so there's plenty on offer. You'll also find that the more flexible you can be in terms of destination, departure times, etc. the better your chances of grabbing one of the many TUI last minute holidays.

So whether you're looking for a beach break in Spain, or an all inclusive getaway in Turkey, TUI late holiday deals are definitely worth thinking about when it comes to booking your next holiday. Plus look out for TUI's discount codes for money off certain package holidays. But don't forget to check out the likes of Jet2 late deals and On The Beach last minute holidays too.

It can be a bit of a minefield when you're looking at which are the best last minute destinations with TUI. One week it's the Algarve, while the next week it's Cyprus. So how can you plan for a last minute holiday? In all honesty, it's difficult to plan and you should be prepared to be flexible at the last second to grab a bargain late holiday.

There are some holiday trends you can sort of predict. Travel outside of school holidays and you'll find prices are cheaper, which could also mean that TUI is looking to fill its planes and hotels close to departure if they haven't been sold. Destinations can really vary but you may find that a couple of key holiday destinations will be reliable options. With plenty of flights from the UK, TUI late deals to Spain can be a bargain

There are generally quite a few flights to the Algarve from across the UK, including "local" airports like from Bristol, Newcastle and the Midlands, and with plenty of hotels too, it could be a very good option for a late deal with TUI or any other tour operator. Because it's quite cheap too, late deals to the Algarve can be at bargain prices. Try areas like Albufeira or Lagos which are a little further from Faro airport, but if you're booking a package holiday and your airport transfer is included, you'll have some great options to choose from.

With plenty of flights from the UK, TUI late deals to Spain can be a real bargain. Popular destinations in mainland Spain, like the Costa Blanca or Costa del Sol, offers a higher volume of flights and hotel rooms available means that holiday companies may have a number of late holiday options to choose from and you won't be stuck in some grotty apartments outside of town. Benidorm might have certain connotations, but there are some great resorts in the area. Late deals to Benidorm are another one to look out for, for some bargain prices.

The Canary Islands are another great option for last minute holidays. TUI flies to Fuerteventura, Tenerife, Gran Canaria, La Palma and Lanzarote, meaning you've got a range of destinations if you can be flexible when booking. Better still, these are great places to visit for winter beach holidays when the UK gets cold and average temperatures in the Canaries sit around the late teens to early twenties. Try one of TUI's last minute deals to Tenerife and stay at any one of its various holiday resorts which are dotted around the island. Keep to the south-west of the island in areas like the Golf del Sur and Playa de las Americas for the best weather and shorter airport transfer times.

TUI's late deals on long haul holidays can often be where you see some of the biggest savings at the very last minute. Destinations like Barbados, Mauritius and Mexico can be expensive for TUI if flight seats and rooms go empty, so there are yet more late holiday deals to be had when travelling long haul. All inclusive is a great way to keep costs down, however, if you try somewhere like Mexico or India, you might find that costs in the resort are cheap, so other board options could be a good idea, allowing you to eat out and try the local cuisine.

TUI offers a number of late deals at adults only resorts across the Mediterranean, Caribbean and Indian Ocean, from the Hotel Riudor in Benidorm to the TUI Blue Lagoon Resort in Mauritius. All inclusive adults only offers are also worth looking out for at the last minute and is a great way to ensure you minimise the cost whilst on holiday, when pretty much everything is included.

With Marella cruises, TUI cruises late deals are also bargains worth keeping an eye out for, whether that's flying from Manchester, London or Newcastle, or departing from the UK ports. The cruises will run anyway, so TUI are keen to make sure the cabins are filled when they depart. While they will try and sell them as far in advance as possible to fill the availability, TUI may offer last minute deals on cruises to help fill these if they have empty cabins close to departure. This is also the case, if they get cancellations, where they want to refill cabins that were cancelled.

The luxury holiday brand amongst its portfolio, TUI's Sensatori late deals cater to those who want a bargain without missing out on a 5-star experience. Look out for late availability on their website across their various Sensatori resorts including their popular hotels in Greece and Turkey.

Got a budget and want to stick to it? TUI's all inclusive late deals are the perfect way to make sure you stick to a set amount of money for your holiday. Go for an all inclusive package and you'll get checked-in luggage included on TUI flights, delicious food, local drinks, some activities depending on your destination, and probably more! There are loads of all inclusive hotel options so you should have a few great late holidays to choose from.

TUI Holidays (previously Thomson Holidays) has become a well respected brand in both the UK and Europe. TUI's last minute deals range caters for all tastes and budgets, ranging from 2-star, self-catering accommodation to 5-star luxury resorts, but with flights and transfers included in the price, you can be safe in the knowledge that all TUI late deals and holidays are fully ATOL protected when booking package holidays with them. So whether you're after a last minute cruise, a late holiday deal to Greece or just a quick getaway with some mates, there is a great range of last minute offers with TUI.

Booking a last minute holiday doesn't always guarantee the best deals, however, holiday companies such as TUI are keen to fill up hotel rooms and plane seats, even at the last minute at a discount, so if you can be flexible on where and when you go, you could grab yourself a great late deal with TUI. It's worth noting that the summer school holidays get booked up pretty quickly, so TUI last minute deals might not always be the best option. if you want to make sure you travel on certain dates, from a particular airport and can stay at your favourite hotel, you may be better off booking early.